EXECUTIVE SUMMARY: This is the second in a planned series of articles to review and summarize the historic performance of selected technical indicators for hedging livestock (cattle, hogs, and feeder cattle).  The main objective of the series is to document the comparative performance of selected indicators in a standard format to help producers choose the ones that are most likely to assist in making effective and timely price risk management decisions.

A template was created in a spreadsheet format using the last 300 days of the Lean Hogs contracts for December 2008-2012.  This article reviews simulated hedging decisions using nine moving average based indicators to calculate hedging gains and losses with predetermined hedging rules.  The average contract closing price for the five contracts was $71.45.

To make the transition from grains to livestock as smooth as possible, the first three articles in the livestock series will start with the same nine technical indicators that were used in the grain studies.  All nine indicators are in the moving average group, and would be considered as trend following indicators.  Earlier articles have documented that the results were significantly better when the basic moving average formulas were modified to give increased emphasis to the major trend.  Because similar outcomes were produced with the livestock studies, only the results for the modified formulas will be presented and discussed.  For more details on the impact of the modifications, please refer back to the series of grain articles in the archives.

This article discusses the results for a five year test period (2008-2012) for the December contract for Lean Hogs on the Chicago Mercantile Exchange.  The contract is for 40,000 pounds and is quoted in dollars per hundredweight.  For each contract, the last 300 days were used for the analysis.  At the top of the Modified Moving Average Crossover table, the contracts are listed in the first column (LH is for Lean Hogs, Z is for December, and 08 is for 2008).  The Hedging Gain/Loss Per Contract is the total gain or loss in dollars per hundredweight ($13.37 for LHZ08 using MA5 and MA17).  On first glance, it appears that the hedging process worked well for the LHZ08 contract, with eight of the nine indicators capturing more than $10.00 per hundredweight (commissions and fees ignored).  Seven of the nine indicators captured $10.00 of gain for the LZH09 contract as well.  The MA(5,17) indicator produced those results with no losing trades.  If the indicators produced this well for all of the contracts, most producers would not need to look much farther for an effective hedging strategy. 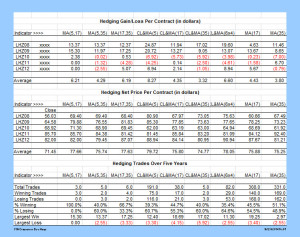 Selecting a “best” indicator from this set is a challenge because there are tradeoffs between size of hedging gain and the number and the size of losing trades.  If not having a net loss any year is important, then the MA(5,17) indicator stands out.  However, that indicator made no trades at all for LHZ11 and LHZ12, meaning the producer would have had no price protection in place any time during those two years.

How reasonable is it to not have price protection in place?  The answer depends heavily on the emotional and financial state of the producer/manager.  If you have a system in place that you trust, and the system indicates that the trend is up, the correct economic decision is to maintain an open position with no price protection in place.  Therefore, the answer rests heavily on whether you trust the system, and what the characteristics were of the underlying contracts.

LHZ11 opened at the beginning of the 300 day test period at $71.45 (the contract low), and then rallied to a high of $90.95 before closing at $85.90.  LHZ12 opened at $80.70, and then rallied to a high of $85.95 before making a low of $70.50 and closing at $82.00.  In both cases, staying open allowed the producer to sell in the top 70% of the trading range.  Some systems are only designed to get you priced in the top third of the range with associated pricing strategies.  While there were opportunities to pick up hedging gains with both contracts by using a different set of parameters, staying open was not a bad outcome compared to other marketing systems and advice.

Readers are reminded that these are preliminary results, but that moving average indicators were not expected to work as well for livestock as for the grains.  Readers are also reminded that the results are only for the December contracts for Lean Hogs, and for only one five year test period.

Since this is a learning site, and because there are four other families of indictors to be reviewed, it is not productive to try to go farther at this time to identify a “best” indicators for Lean Hogs.  The definition of “best” is very subjective and unique to each management team.  The main focus of this article is to provide preliminary results on how effective the moving average indicators have been for hedging Dec Lean Hogs.  The secondary point is to focus attention on factors which can significantly distort the selection of a “best” indicator, such as the size and number of losing trades, cumulative losses, etc.

Watch for the next article which will focus on the use of moving averages to hedge Nov Feeder Cattle.

As always, comments and questions are welcome.  The easiest way is to Reply to the post on the Discussion Group page relating to Dec Hogs – MA.