Executive Summary:  The Selective Hedging system generated an average hedging gain of more than $250,000 per year when compared to standard benchmarks over the last seven years for a model European wheat farm with 10,000 metric tons of production.  The gain was achieved with 15 sales using July contracts or 7 sales using Dec contracts.  Eleven of the 15 sales on the July contracts produced no losses, and the other four sales had losses ranging from 3.50 to 32.25 cents per bushel which were made up with subsequent sales.  There were no losing sales on the Dec contracts.

Benchmarking has become the buzzword in agriculture only recently.  For years, the reaction has been that each production unit is so unique that no meaningful comparison can be made between units.  Nonsense!  Benchmarks have been used in the financial community to measure performance and to compare companies for decades.  One big difference is that public companies are required to file quarterly and annual reports in a standard format using standard accounting practices.  Many farming units are not public companies and protect their privacy with great vigor.

There is little doubt that managers of large and growing ag units want to know about their performance, and they want to know how well they are doing compared to peer units.  It is not a contest about winning or losing; it is all about improving performance.

It is in this context that I am shocked at how little benchmarking there is for price risk management — prices received and revenue generated per bushel, hundredweight, or ton.  As I work with producers, it is quite clear that many don’t know how well their marketing strategies work against standard benchmarks, and many others don’t want to admit how poorly they did, with or without the help of a marketing expert.

Below are two tables that I was asked to prepare for a group of European wheat farmers, based on a model farm with production of 10,000 metric tons (~367,333 bu).  They asked for benchmarking of the prices and gain resulting from the Selective Hedging signals against the average daily price and against the closing price for the futures contracts.  Average daily prices and futures closing prices may or may not be the best benchmarks, but they are an excellent starting point.  They are easy to understand, and standard across the global arena.  There are no questions about accounting practices or marketing plan objectives.  These are benchmarks we can all relate to.  At minimum, you should produce these numbers for your own marketing, or demand them if you are paying someone to market for you. 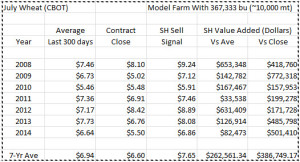 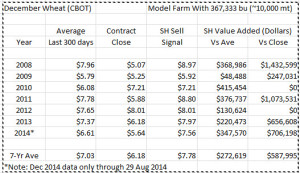 The Selective Hedging signals were generated with a system of quantitative technical indicators.  The parameters were selected with backtesting, and then applied consistently and uniformly across all seven years.  The hedging period is the last 300 days of each contract.  Commissions and fees were ignored, but there were a total of 22 sales for an average of less than 1.6 trades per hedging period.  There were 15 sales on the July contracts, with 11 of the 15 sales producing a gain.  The four sales resulting in losses ranged from 3.50 to 35.25 cents per bushel.  There were no losing sales on the seven Dec contracts.

Either the July contracts or the December contracts could be used for production hedging, depending on your expected delivery¸ but they can be combined for production and storage hedges.  While it would be nice to add the gains together for both contracts, that is probably not realistic because of the overlap of the two contracts.  Only part of the gain from the storage hedges can be added to the production hedges because of the overlap of contracts.  On the other hand, if you are willing to hedge farther back than 300 days from point of delivery, then the gains may be additive.