EXECUTIVE SUMMARY:  This is the fifth in a planned series of articles reviewing and summarizing the estimated performance of selected trend indicators based on simple moving averages.  Focus for articles four through six shifts to July contracts which are sometimes described as storage or old crop contracts.  The main objective is to document the comparative performance of selected indicators to help producers choose the ones that are most likely to assist in making effective and timely price risk management decisions.

A template was created in a spreadsheet format using the last 300 days of the July Corn contracts for 2008-2012.  Formulas were written to simulate hedging decisions for nine moving average based indicators and to calculate the hedging gains or losses based on the predefined hedging rules.  The average contract closing price was $5.70 for the five contracts.

Only one of the nine indicators initially produced a positive average net hedging gain (commissions and fees ignored), resulting in a net hedged price of $5.83.  The trading rules were then modified to give greater emphasis to major trends, and all nine of the indicators produced average net hedged prices higher than the $5.70 base price, with a best of $6.30.  Six modified indicators had no losing trades over the life of the five contracts.

I trust that you have read the first two articles (wheat and corn) which contained more detailed information about the backtesting approach and caveats about the data.  If you have not read one of the previous articles, please do.  The results reported here are based on the last 300 trading days of the contracts.  While the results are believed to be as accurate as reasonably possible, they should be reviewed as research analysis results and not as “black box” trading systems. 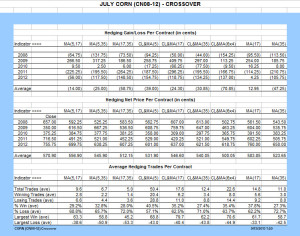 Let’s take a look at the estimated performance data now.  Scanning across the bottom row of the Hedging Gain/Loss table, none of the indicators stand out for producing an average hedging gain, with only one producing a positive return.  That one was MA(5,17).  As shown on the bottom line of the Hedging Net Price table, it follows that MA(17) produced an average estimated net hedging prices of $5.83 compared to the average default closing price for the five years of $5.70.

Perhaps this is a good place to point out why moving averages are often criticized, and many people conclude that hedging with technical indicators does not work.  Literally, these results say that if you use any of the eight indicators other than MA(17), you would be buying price protection at the cost of lost revenue.  That definitely is not what we had in mind.

The number of trades ranged from an average of 5.0 to 50.4.  It may be noted that this number of trading signals is very similar to the number of signals that were reported for the fall contracts for wheat, corn, and soybeans in earlier articles. 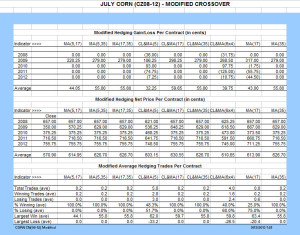 But before you put all of you eggs in one basket, let’s take a look at the second set of tables based on the modified trading rules.  Scanning across the bottom row of the Modified Hedging Gain/Loss table, all of the indicators now produce an average hedging gain of at least $0.32 per bushel.  Six of those do so with no losing trades over the life of the five contracts.  Please refer to the table for details on the other indicators.

The average number of sell signals dropped significantly to an average low of 0.2 and high of 5.8.  Six of the nine indicators produced only one sell signal in five years, with NO LOSING trades on any of the five contracts.  MA(5,35), MA(17,35), CL&MA(35), and MA(35) happen to be the same four indicators that had no losing trades for December corn and November soybeans. Two of the four had no losing trades for December wheat also.  Keep the consistency in mind as you try to focus in to narrow down the list of indicators you might settle on for use across several commodities.

Wait, it gets better!  The four indicators which have been most consistent had no losing trades and gave only one sell signal per year or kept an open position to the end of the contract.  For a pure hedger who probably is using cash forward contracts, it doesn’t get much better.  Perhaps one can find an indicator that would produce a higher price with no losing trades, but that would be the only improvement.  Again, be reminded that past performance is no guarantee of future success, but it certainly does attract attention.

As stated earlier, there are plus and minus points to various indicators, and not everyone will choose the same one.  Looking at the list of nine indicators, there are some differences.  The estimated price range from $6.03 to $6.30 is relatively small over the five years.  Considering the net hedging gain and no losing trades, MA(5,35), MA(17,35), CL&MA(17), CL&MA(6×4), and MA(35) appear to stand out for their performance.